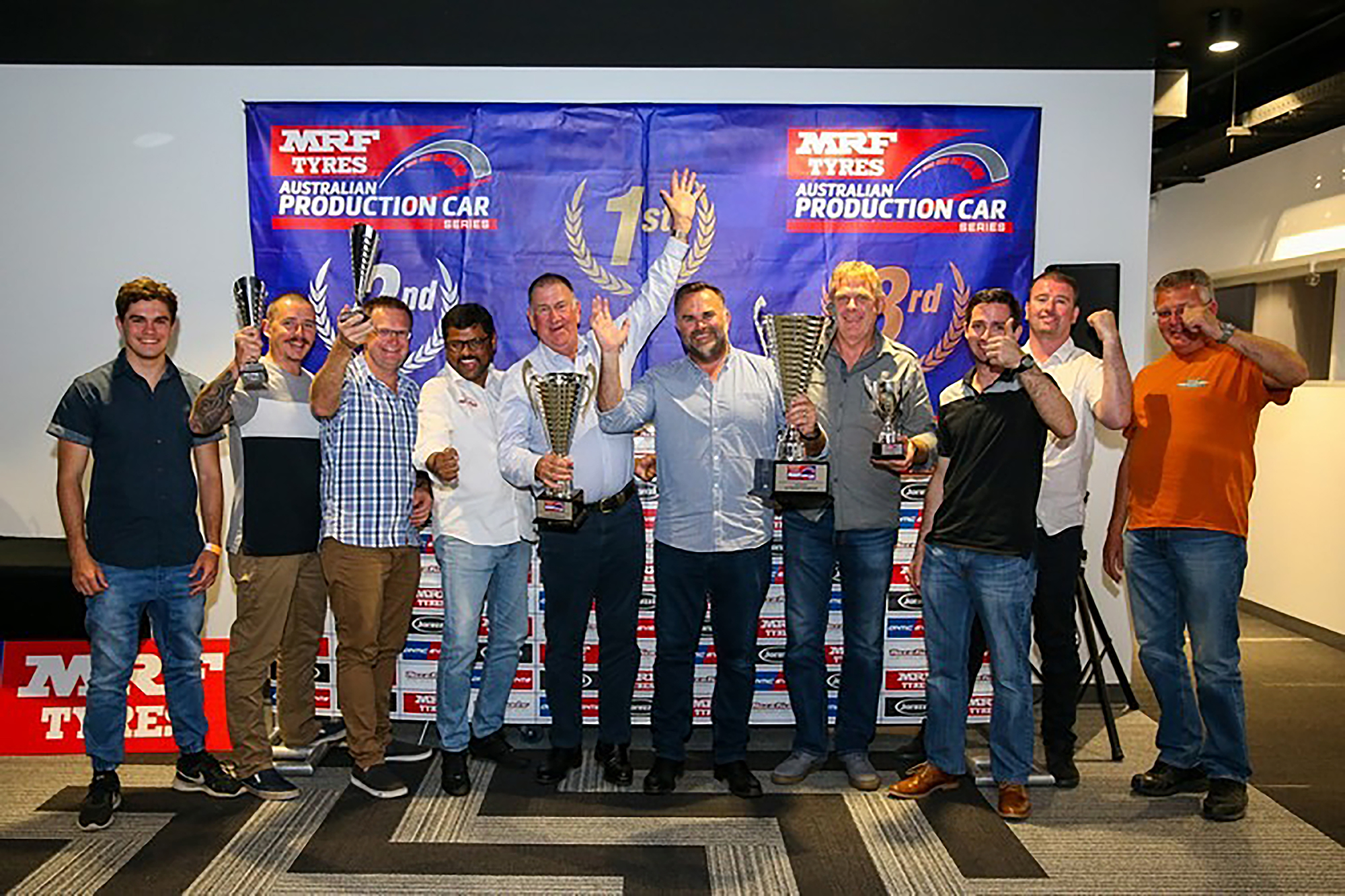 Sherrin Racing has secured their third outright MRF Tyres Australian Production Cars Outright Championship with a stunning Sunday performance at the final round of the season at The Bend Motorsport Park.

The weekend got off to a bumpy start for the #18 Sherrin Racing BMW M4, with an internal break on the left rear shock avoiding detection across Saturday due to its location, leaving Grant and Iain with a badly handling steed for the day’s two one-hour races.

Despite those issues, the brothers put in a valiant performance to secure 7th and 6th outright and 2nd in class A2 across the two races before the Sherrin Racing crew diagnosed the problem on Saturday evening.

On Sunday, all of the hard work of the crew overnight paid off with the car “on rails” across the final two races of the 2019 MRF Tyres APC season.

In race three Grant had a brilliant start to move from sixth on the grid to lead the field into the first corner, where he stayed ahead of championship rival Lindsay Kearns in the #25 Mustang until the compulsory pit stop window opened. The longer pit requirements for the A1 cars saw Kearns (of class A2) jump him in the pits, however when his Mustang struck trouble later in the race Grant was able to take advantage to take the race win and as a result, catapult Iain from third into the outright championship lead by two points over Kearns and his co-driver Coleby Cowham.

In race four, Iain had to finish ahead of the Mustang to secure the championship and he got that pursuit off to a great start by leading the Mustang – this time driven by Cowham – into the first turn while Nathan Callaghan, the co-driver of championship rival Chris Lillis in the #64 Holden HSV VE, was close behind in P3.

When Cowham succumbed to a mechanical failure, it was down to Iain and Callaghan. For a great portion of the race Iain looked set to win the championship on a tie-break as he was third on the road while Callaghan lead after taking advantage of the less arduous pit stop requirements for his AM1 entry. However, he was able to ensure no tie break was needed, passing Callaghan for the lead to take the victory in a convincing display before enjoying a buffer when the #64 struck problems in the final three laps.

“While I was the one presented with the outright championship trophy because Grant missed the Sandown round and therefore had to settle for sixth in the championship, this is a team result. I couldn’t be here without Grant and all of his driving efforts across the year, nor could I be here without all of the efforts of the entire Sherrin Racing team. This trophy belongs to all of us,” Iain grinned after the race.

“This is our third outright title and we have won them every second year starting from 2015 – hopefully we can go back to back next year!”

“It has been a great season – I am just disappointed that I wasn’t able to come to Sandown! I will keep reminding Iain that he wouldn’t have those big trophies without me though,” Grant joked.

“I can’t thank Sherrin Racing and all of our supporters enough for all they have done to make this season a reality. First in the outright championship and a one-two result in the A1 title is a great result for the #18 and the #19 has impressed with their own championship results as well – hopefully together we can bring home some more great results in 2020.”

For the #19 Sherrin Racing BMW 135i the weekend was a relatively smooth one, with Klae Eckhardt and David Ayres putting in exceptionally consistent performances around The Bend to bring home three 8th outright placings and a 7th outright as well as four 2nd placings in class B1, and second outright in class for the round.

By virtue of their performances across the season, the pairing also secured B1 class championship trophies at the close of the weekend, with Eckhardt awarded second place while Ayres secured third place.

“It has been a great weekend at The Bend Motorsport Park and we are so happy for Iain and Grant for their results in the outright championship and with our own placings in the Class B1 title,” Eckhardt said.

“I want to thank Sherrin Racing for the opportunity to drive with them this year, I have really enjoyed stepping up from working on the cars to being behind the steering wheel, although I still do a lot of time on the spanners! This is a real team effort and I can’t wait to see what we do next.”

“To see the team take out not only first in the outright championship but also 1st and 2nd in A1 and 2nd and 3rd in B1 is very rewarding, and I am very happy to be able to be a part of this team,” Ayres said.

“We had some great races out there this weekend and also across the season. With none of us having been to The Bend Motorsport Park before this weekend everyone had to dig deep and as always, the team rose to the occasion.”

Sherrin Racing will return to the track in 2020 for a six-round MRF Tyres APC season (commencing 6-8 March) and will also take part in the 2020 Hi-Tec Oils Bathurst Six Hour.