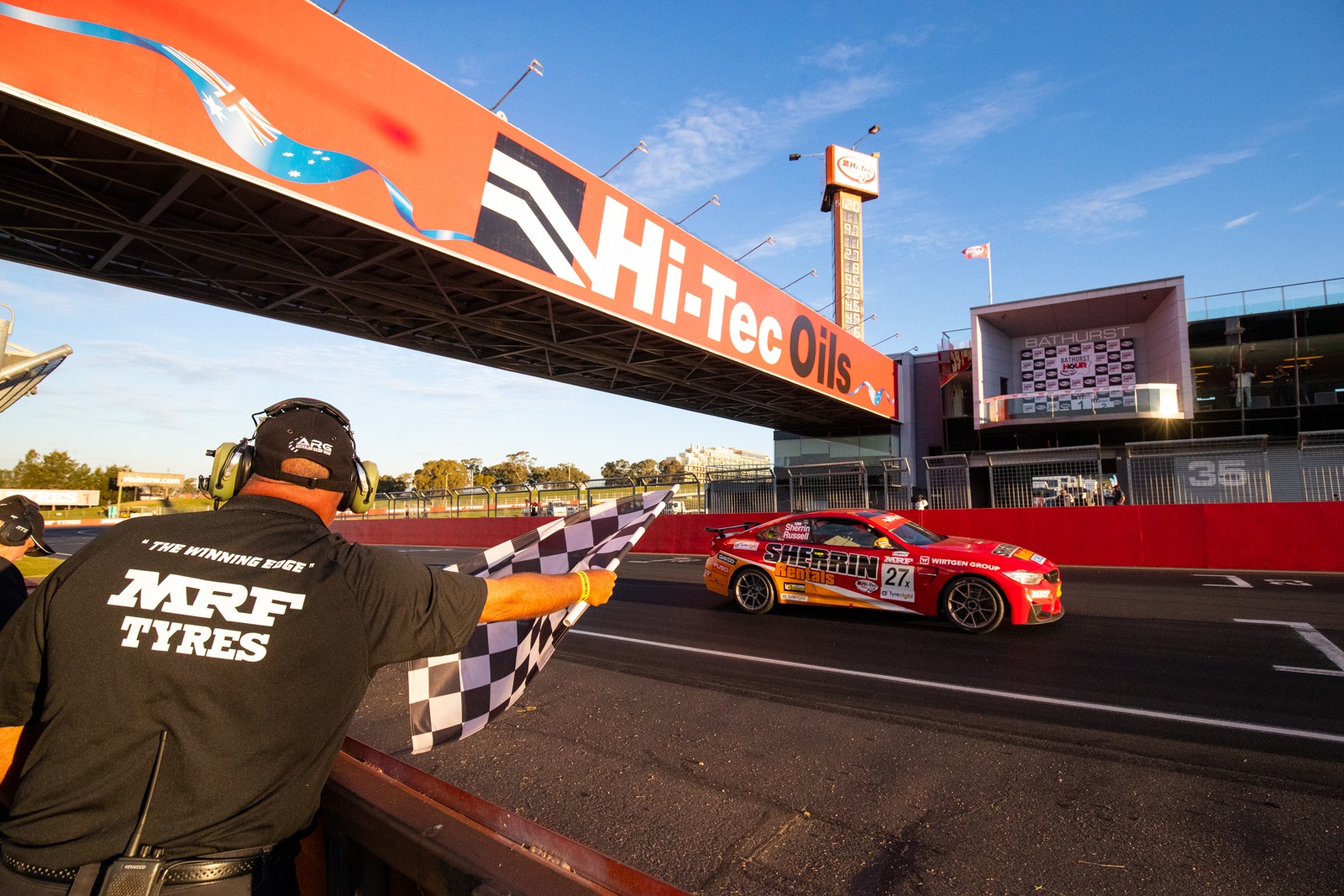 SHERRIN RACING CELEBRATES AT THE MOUNTAIN

Sherrin Racing has walked away from the 2021 Hi-Tec Oils Bathurst Six Hour with its fourth podium in five years, securing third position in a frenetic battle that saw the top three cars covered by only 17 seconds after six hours of racing.

The result is even more impressive when you consider the highly disrupted event lead-up the team experienced, with a snap COVID-19 lockdown in Brisbane seeing the team unable to travel to the event until the evening before the start of the proceedings.

Despite their tumultuous beginning, the team hit the ground running with drivers Grant Sherrin and David Russell putting the #27 Sherrin Rentals BMW M4 third on the timesheets for both of the practice sessions held on Friday.

On Saturday, they advanced to be second fastest, not only in the third and final practice session of the event, but also in qualifying to ensure they started Sunday’s six-hour epic from the front row of the grid alongside the eventual race-winning BMW M4 of Shane van Gisbergen, Shane Smollen and Rob Rubis.

Across the race itself, a combination of excellent pit stops, fantastic race strategy and stellar driving performances ensured the team was at the pointy end of the field for the entirety of the race – even leading by a margin of more than 30 seconds at one point – and well in touch of the lead in the final stint despite the #27 lacking in straight line speed when compared to its two main rivals.

“From the time Grant and I hit the track on Friday we worked hard to get the car handling as well as possible for the race, and it was really great to be on the front row for qualifying. I agonised a bit over those three or four hundredths of a second as they were definitely there and we were very, very close to pole position, but at that point we were more focused on setting ourselves up for the race than anything else,” David Russell said.

“A lot of things went our way in the race and we were leading by over 30 seconds thanks to the execution of our pit stops at one stage. Everything was going really well, but unfortunately, we had a couple of unluckily timed safety cars which allowed other teams to catch up on the gains we had made.

“Grant did a fantastic job, especially in his second stint where he was out there in the heat with long safety car periods and with some big names around him – he was battling Tim Slade, Tim Leahey and Shane van Gisbergen and had really good pace to keep us in touch the whole time despite his stint being extended to get us in the pit stop window.

“The car ran faultlessly all day, and it was always the plan that if we weren’t in the lead we wanted to be in touch to be able to go for the win come that last stint and that is what we were able to achieve, although it was certainly evident we needed a bit more power on the straights compared to the two leading cars.

“I threw everything at it in the last stint to try and bridge the gap while working around lapped traffic and I did manage to get it down quite a bit, but we were also unlucky with some traffic that came up at the wrong moments.

“To be able to join Sherrin Racing again after a long association and to be able to get a podium was a very satisfying result, and while we might not have gotten the win, to secure a podium in what was a very tough field this year was definitely very rewarding and to join Grant on the podium was very special.”

Grant Sherrin echoed Russell’s comments, commending the team on its efforts throughout the weekend.

“It was an incredibly tough and competitive race with many safety cars and we did everything that we could. We didn’t quite have the speed on the straights to overcome that last gap, but we certainly threw everything we could at it and the entire team did a phenomenal job,” Sherrin said.

“The way the crew conducted the pit stops in the minimum time required was just incredible and they really put us in a great position early in the race. They were on the go all the time as with six compulsory pit stops required and the new rules about refuelling, there was a lot happening in the pits and they just did a marvellous job.

“David Ayres – who was filling in for Michael Sherrin as team manager as he was unable to attend due to family commitments – executed a brilliant strategy for us across the day and our thanks goes to him for stepping up into that role for the first time and doing an absolutely fantastic job.

“David Russell of course was excellent behind the wheel in qualifying and in the race, and also in helping us with getting the car more finely tuned – it was great to drive with him again.

“Overall, the entire team operated amazingly all weekend and it was that team effort which put us in the position of ultimately being able to get a podium and to be in touch to challenge for a win in what were exceptionally competitive circumstances.

“The Hi-Tec Oils Bathurst Six Hour is always a great event to be a part of, and I am very proud as I know everyone in our team is of what we were able to achieve over the weekend.

“Our thanks goes to all of our family, friends, sponsors and followers for their support and encouragement. We are really looking forward to keeping this momentum going in 2021 and look forward to getting back out on the track again soon!”