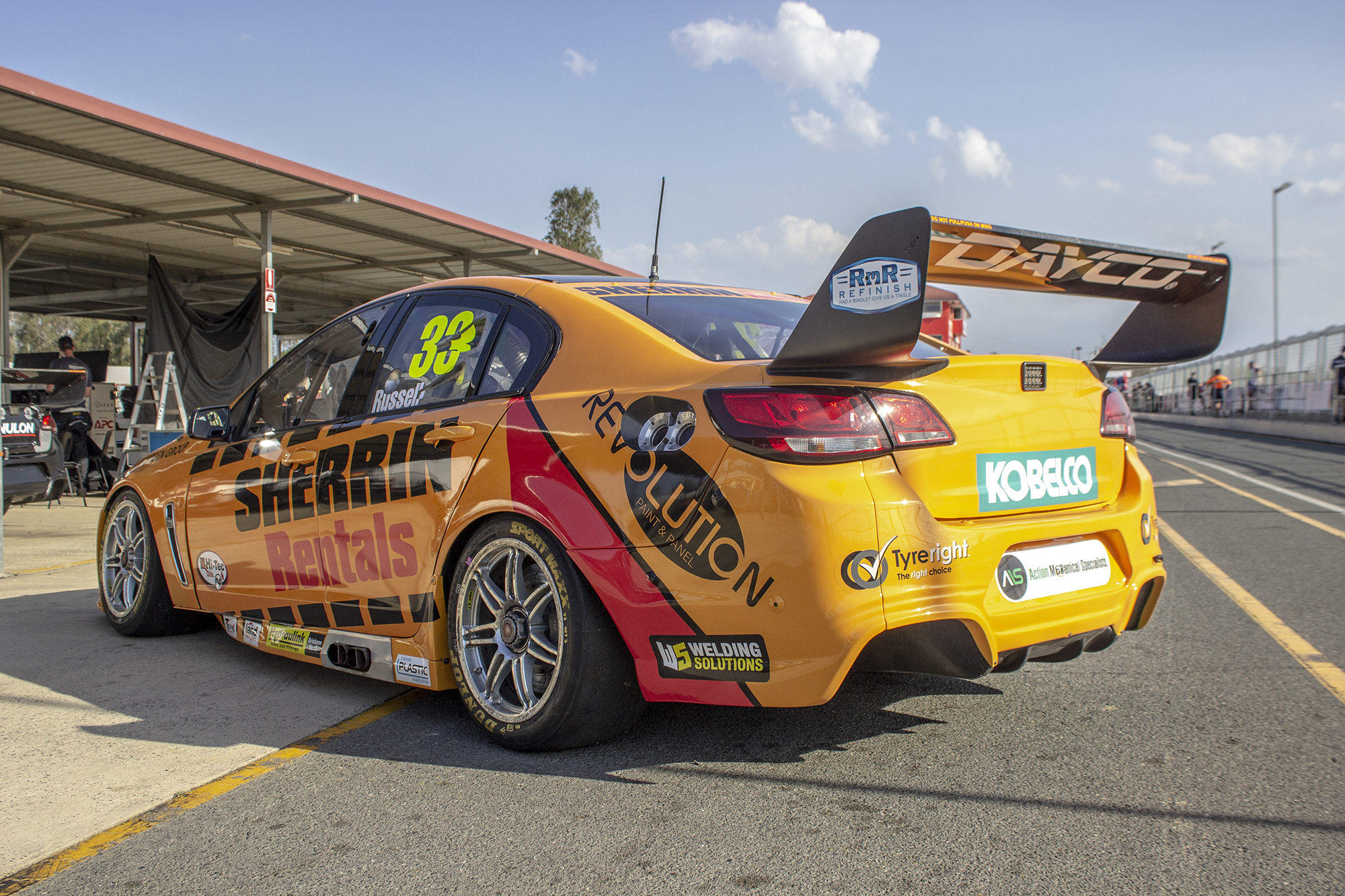 10 years ago in 2009, Sherrin Rentals partnered with driver David Russell, taking part in the Dunlop Series. It was an unforgettable time, and we had a thrilling podium finish in the Super2’s at the Bathurst 1000, and finished third outright for the series.

This 2009 event was a big part of Sherrin Racing history in our association with Supercar racing. And the memorabilia photo frame is still on the wall of our Head Office to this day.

With this year being the 10 year anniversary of this memorable event, we have been given an exciting opportunity to join forces with Matt Stone Racing, along with driver David Russell again, and relive a bit of history in a VF Commodore Super2 car at this year’s 2019 Super2 Series 250km preliminary race at the Supercheap Auto Bathurst 1000 on Saturday 12th October.

The car took to the track with Matt Stone Racing on Monday 30th September at Queensland Raceway for a test day to make sure all is in order for the upcoming event. And with the car now fully wrapped in the Sherrin Rentals design, it is definitely eye catching, and having David Russell behind the wheel, the Commodore certainly didn’t fail to impress at the track!!

Click on the below link to a news article on the Matt Stone Racing website which has a few words from David Russell who’s driving our Supercar at Bathurst in a couple weeks’ time.

37-year-old David Russell is more than familiar with endurance races and Mt Panorama. Although it’s been a year since steering a Supercar, the Sherrin Rentals team test day at Queensland Raceway on Monday 30th September went as smoothly as anticipated for him. “This year I’ve done the Bathurst 12 hour and 6 hour and I’m heading there to do the Super2 so I’m confident going there in car #33. For me this week was about getting some miles and the muscle memory up and understanding every little bit about driving a supercar again. You just need that little bit of time just to get your head in the game from driving other cars and I feel I’ve done that today.”

His confidence is quietly bolstered not only by MSR backing him, but Sherrin Rentals, a partnership with historical significance for Russell. “From my point of view, it’s pretty special to have the same livery 10 years later and backing of Sherrin Rentals, they’ve been a huge supporter of my career. To be here at MSR is very cool and I’m appreciative of the opportunity to go to Australia’s best track and have a crack at the Super2 race. I’m really excited about it and to have Sherrin Rentals supporting us…it’s been good to be able to put it all together.”

In 2009 David Russell debuted the Sherrin Rental partnership livery for the entire season. That year, he came 3rd at Bathurst in the Development Series and 3rd overall in the championship. With nine Super2 wins under his belt already, Russell doesn’t want to sound “too bullish” but he sees no reason as to why he can’t get on the podium again this time around.

The Holden VF Commodore with its striking Sherrin Rentals livery will be hard to miss flying around the mountain. Russell brings his GT racing skills to the circuit, being 3-4 seconds per lap faster than a Supercar there’s no questioning his talent, endurance or versatility.

Matt Stone team principal said “it’s good to have David Russell back in the team. We ran together in the 12 hour at start of year and it’s good to be able to continue the relationship in Super2. We have competed against Russell in Super2 for years so are well aware of his abilities and what he will bring.”

The Super2 race schedule for Bathurst is a 250km endure feature race on Saturday 12th October with practice sessions and qualifying on Thursday and Friday.