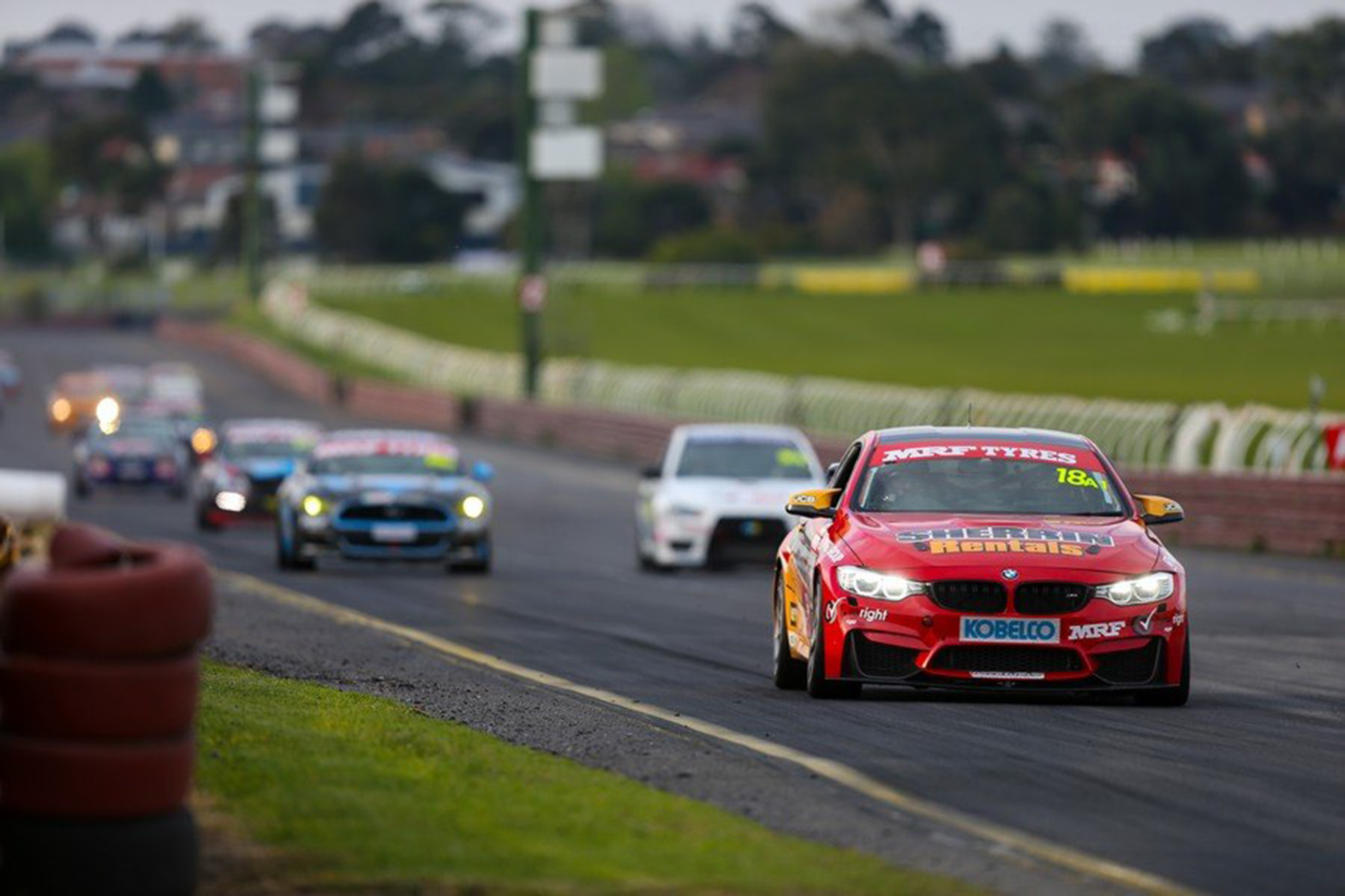 Sherrin Racing has enjoyed a successful weekend at Sandown Raceway for the penultimate round of the 2019 MRF Tyres Australian Production Cars, bringing home round victories in class A1 and B1 along with 2nd in the outright standings.

The results ensure that heading into the final round at Tailem Bend Motorsport Park (November 15-17), Iain Sherrin and Grant Sherrin continue to lead the way in the A1 championship while remaining in the fight for the exceptionally close outright battle while Klae Eckhardt maintains his place in the B1 title contest.

This weekend’s event featured four one-hour races – one on Friday, two on Saturday and one on Sunday – with each outing full of intense action that kept the entire field on its toes.

When all was said and done, Iain Sherrin – who was driving the #18 Sherrin Racing BMW M4 solo this weekend with brother Grant unable to attend – took home the A1 round win and 2nd outright overall after he secured the A1 and outright top qualifying honours, A1 class victories in all four races, and an outright race victory alongside two second outright placings.

On Friday, a strong early race lead for Iain was undercut by a delayed race start and a late safety car and he ultimately was forced to settle for second outright after he ran out of laps to reel in the outright winner.

He made up for that frustration on Saturday, crossing the line before all other contenders with a victory which truly showcased the ability of both car and driver when he had to recover a 18 second deficit in the closing stages after a mid-race car issue.

Wet weather for Saturday’s afternoon race ensured it was a case of  maintaining a finishing position for the #18 when exceptionally slippery conditions caused plenty of issues, while Sunday’s final race hosted a thrilling battle all the way to the finish as Sherrin raced on the ragged edge to fight through the field off the start and again after the CPS window on his way to second outright and the class A1 win.

“On Friday we were always going to be pushing it to take the win with the delayed start and then with a late race safety car that hurt us even further, as with the longer CPS requirements for A1 compared to the other classes we need to be able to really push in the latter stages to recover the ground we lose in the pits,” Iain explained.

“The car was really great out there though and it was a nice clean race, so we were happy to bring home P2 and start on the front row of the grid for Saturday morning’s race where despite some car issues, we were able to bring home the outright win.

“Saturday afternoon was really tough for the entire field – while our car was fine as far as balance and everything, with the turbos we were having trouble with breaking traction even when going down the straight in sixth gear. We just didn’t have the weapon for those conditions but we did all we could and brought it home straight and ready to try again for Sunday afternoon’s race which was thankfully much drier!

“Sunday was truly a fantastic race and a whole lot of fun. The Mustang was going really well but we did a great pit stop and resumed the race pretty close to them so it was a matter to tracking them down. They were quite hard to get past as they were getting really good drive off the last corner and pulling two car lengths on me. I even had to back off for a few laps as the car was getting hot and the tyres were squirming! In the last ten minutes I had another crack and I managed to get in there and get by him and from there it was a bit wild with lots of dicing – it was a great race and I had a lot of fun.”

Across the weekend, Klae Eckhardt put the #19 Sherrin Rentals BMW135i on pole for Class B1 before claiming three class B1 victories as well as 4th, 5th, 11th and 6th outright on his way to the B1 round win.

Friday’s opening race brought a best-ever outright race finishing position of fourth outright for Klae, before Saturday morning’s race hosted some intense battles for position which ended up with another class B1 victory and fifth outright.

Saturday afternoon’s race was, as it was for the #18, a very difficult outing for the entry, but Sunday morning saw the team’s fortunes turn around with another class race victory as well as a outright result of sixth.

“The car was really great this weekend overall even though we struggled with the really wet conditions in Saturday’s race – we certainly weren’t alone in that!” Klae explained.

“Clinching our best ever outright result on Friday was really exciting. On Saturday morning we crossed the line in third outright but were classified 5th when some spirited battling for position ended up with another car spinning – that was certainly never my intention and I am sorry that that happened.

“On Sunday the conditions were much better and that made it a lot easier for us out there. It was a great race too, our competitors in the B1 class gave us a really good fight and we were really pleased to take the class win.

“My thanks goes to the Sherrin Rentals team and Michael Sherrin for the opportunity and for the car – the car was really great today and it all came together, I couldn’t be happier with today’s result.”

Sherrin Racing will next be on-track for the final round of the 2019 MRF Tyres APC at Tailem Bend Motorsport Park across November 15-17.