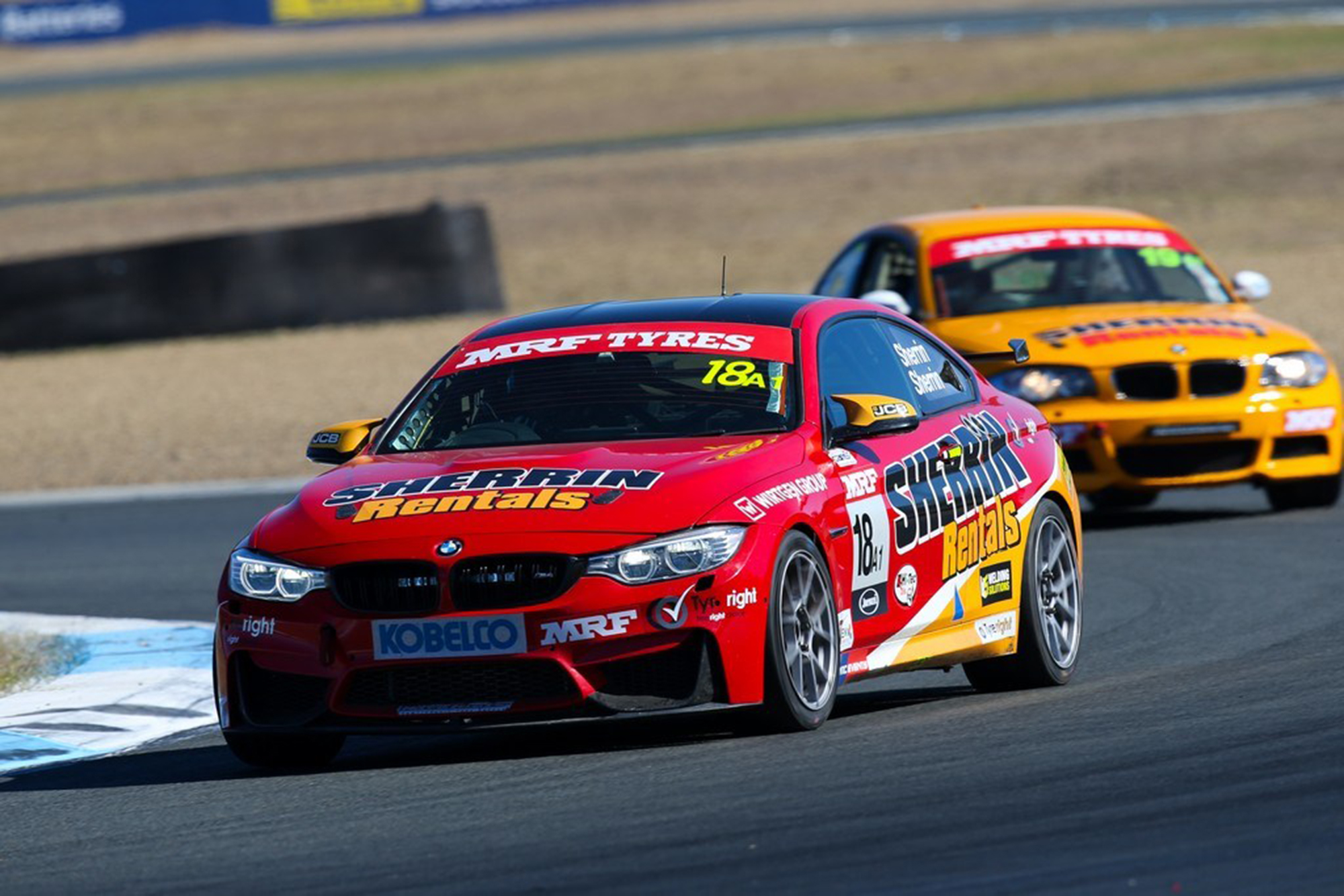 On Saturday evening at Queensland Raceway’s Fight in the Night, there was plenty of work underway in the Sherrin Racing garage at round three of the 2019 MRF Tyres Australian Production Cars.

While Klae Eckhardt and David Ayres had brought home 2nd in class B1 and sixth outright in Saturday’s Fight in the Night 300km race under lights, the #18 Sherrin Racing BMW M4 had ground to a halt on the straight early in the piece – after showing impressive pace early, a slipped timing chain had caused the ECU to shut the M4 down.

While they made it home in a strong position, Eckhardt and Ayres hadn’t escaped problems either, with a clutch failure on the final lap of the race seeing them just make it home and requiring plenty of midnight oil to have the #19 ready for Sunday’s final 300km race.

Making the M4’s result even more exceptional was the fact that Iain Sherrin had to start Sunday’s race from the rear of the grid due to the car’s failure to finish on Saturday night. The older of the Sherrin brothers put the M4 into 6th by the end of lap one before climbing to 2nd position by lap seven in an impressive display.

“It was pretty hectic getting through the field from the rear of the grid but it all came together nicely,” Iain Sherrin said.

“The guys in the pits did a great job to get this car back into great form and I did all I could to bring home a winning result for them.

Grant Sherrin took over the driving duties from Iain for the latter half of the race.

“Iain had put in a very good stint early in the race, unfortunately in the second half the car wasn’t quite as good as with the heat of the day the car just went away from us a little,” Grant Sherrin explained.

“Overall though we are happy – there are a few things we need to go away and have a look at but to go from where we were last night to here is pretty good. We had a bit of luck on our side Saturday night and there was a lot of hard work which saw us able to get the car back out Sunday; so we are pretty happy with the result.”

For Eckhardt and Ayres in the #19, it was a relatively event-free race which was just what they were looking for after Saturday’s stresses.

“It was a good, clean race out there on Sunday. The car went well and the tyres were awesome; the boys did an excellent job in the pits and we had an awesome strategy from Mike Sherrin,” Eckhardt said.

“Klae handed the car over in a good position and while I lost a couple of spots at the end with the safety car restart but it was a good race and the car was great,” Ayres said.

“To be finishing up the race on Saturday evening unable to change gears and for us all to be able to dig deep and turn it around overnight for Sunday’s result was very rewarding.”

Sherrin Racing will next be on-track with the MRF Tyres Australian Production Cars for round four of the 2019 season at Sandown International Raceway across September 20-22.